We offer the widest range of technical accessories for industrial laundry. Our products include items selected from the best available ones in the world market as well as product that are designed and manufactured directly by us, thanks to the experience acquired in over seventy years of activity in the sector of the industrial laundry. Our technical salesmen are available to help identify the best solution in response to any possible problem. Our experience allows us also to tailor-make what our customers need.

Whether it is feeding belts, rubberised belts, or polyurethane belts seamed directly by us with a professional, precise method and with the use of high quality materials, or whether it is tubular belts made and sewn in our own workshop, we offer many solutions to help our customers always work with efficient machines. 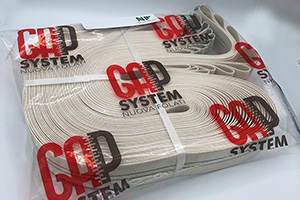 GAP System is our professional belt joining service. You can order us to produce the sets of hooked-staple belts needed to equip your machine (folders, feeders, etc.) and we will make them to measure very quickly.

The quality of the finished product is guaranteed because we use only professional machines for cutting, joining and packaging. The choice of materials is accurate and of high quality. We have a vast range of feeding and rubberised belts made up of dozens of types resulting from our collaboration with the world's leading belt manufacturers: if we don't have it, we make it!

Each belt produced with the GAP System is individually identified by a unique code directly printed and legible near the staple: reordering the belts is very easy, you just need to tell us the code. From the code we can track down the size, the type of ribbon, the type of hooked-staple, and so on. 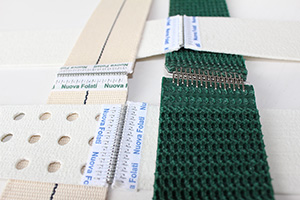 If you make the bands on your own we can support you with our range of belts of any height and type.

Feed and Tubular Belts. Belts in polyester, cotton and wool, made to measure according to your specifications.

Rubberised Belts. Carrarmato and Habicord belts with following properties: tortoiseshell backs, polyurethane, PVC, diamond-tipped, antistatic, plugged, with or without guides, ring-welded or crimped. The number of types is countless. 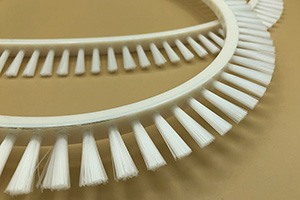 In addition to the original brushes for the Jensen Plus Introducers, we offer a range of metre brushes of different cross-sections, which we can weld to size or sell together with the joining devices for an independent use by the client. 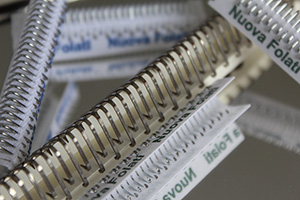 Staples and Accessories for Joining

Our range of belts is completed by staples, splicing cores, joiners and belt tensioners. Everything is always available from stock to meet any requirement quickly.